Sarasota Florida's The D.O.O.D. on their Kill the Light Tour in support of their album Firefly brings their theatrical metal stage show to the Slam House in Bradenton FL with special guests Gods of Centaurus and moreTBA

WrightLane Productions presents Defy the Tyrant, with support from Once King's, Lydia Can't Breath, and The DOOD at The Shovelhead. 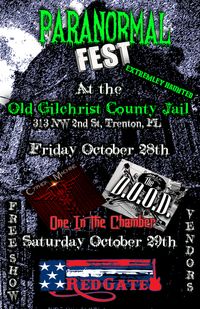 Old Gilchrist County Jail was built in 1928 and operated as the county jail for 40 years before being closed in 1968. In the Jail's last 90+ years of existence many lives have ended in the jail even as recently as 2008. We implore all paranormal investigators to come to the jail and unravel the rich paranormal history that occurs in the cells. This Two Day Event Features Live Music Both nights- Food and Vendors and a damn good place for both paranormal investigators and people who just like Halloween. Friday Night Heavy metal from some of the best metal acts Florida has to offer: One In The Chamber CypherMachine The D.O.O.D. Saturday Night Awesome rock music from Florida's premiere Cover band Redgate Admission is free and the scares are real!!!